Our research about the so called “swales” started with a problem: Due to the very dry summer, we had problems with getting water; It did not rain as much as expected and we could not use our wells in the way we were used to. Taking in account that we had to provide a garden made us thinking about ways to collect water in a more efficient way. Besides, on the area between greenhouse and walnut tree, there was a field which we did not use for anything. This field appeared as a slope which was very exposed to sunlight and the soil under the surface of dried grass was full of clay. This means, that water could run down very easily instead of being soaked by the ground. A field, not used, not capable of collecting water and showing nothing more than compacted ground?

At this moment the swales came into play. 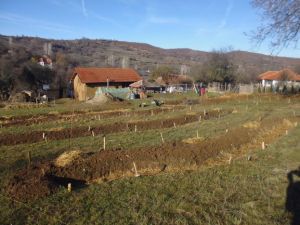 A swale is made of the trench – the part which is dug into the earth – and the berm – the part which occurs as a bump made of ground. Usually, swales look like lines non-parallel to a slope in order to collect rainwater, which would run down if not stopped as in our case. If there are swales, the water fills the trench first and after sokes the ground of the downhill sided berm. Since the earth of the berm is not compacted, it can be used as a place for growing trees or other plants and their roots will be provided with water from the trenches.

With this method of collecting water passively, we hoped to firstly make use of rainwater, secondly loosen the compacted ground and finally find some new purpose for the field. On a longer term we planned to introduce a Forest Garden, using the water from the swales.

A very important thing to consider if you want to build swales is the following: At a slope, water will always run down at the steepest point. That means, that water will go where the land is at it´s lowest height. On a naturally field it is not said that the slope is always the same, but it varies, being more or less steep on different spots. If water shall be collected efficiently it is important, that the swales always follow the contour lines of a slope. Contour lines are the lines which follow the spots on the slope, that are all on the same height. Why is this important for swales? If there would be a slope inside of the trench running down to the left or right side of the field, water will not be distributed over the whole swale, but centralized on one spot: the lowest.

This leads to the first step of building swales: finding the contour lines.

An easy way to do this is to use a very simple tool, called the A-Frame (see picture below). This tool consists of three long pieces of wood, which are connected in the shape of an A. On the top of the A a rope is fixed, which is pulled down by a stone. The two feet of the A can be put on the field now. If they are on the same level, the rope will hang down exactly at the middle of the horizontal slat. Then we move the A around, finding the next point. Following this, we can make a mark at every point, that is on the same height. Connected, they show us the contour line. On this line (remember) water will stay and not flow down.

We marked the spots with some wooden sticks and connected them with rope. What was very interesting to see was, that the lines neither always were straight nor did they lead parallel to each other. This showed us, that the slope of our field varied on different spots.

Our swales should follow the contour lines. To make swales out of this lines we had to make some more measurements to define the place of the trench and the berm. We marked two more lines next to every contour line. One 80 cm uphill which would mark the edge of the trench, and one 120 cm downhill, defining the berm. Between the swales should be at least 2 m space to make it possible to grow trees and offer them enough place. So we had to make some arrangements, moving some lines up or down the hill. Finally, all our contour lines were set and the markings for trenches and berms were fixed. Let the digging begin. 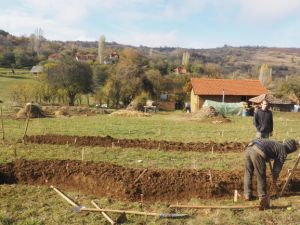 But it was not just about making a ditch into the ground and putting the earth on a hill beside it. We had to follow some measurements in order to catch as much water as possible. The shape of the swale is shown in the graphic below. 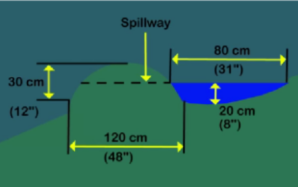 Following this we had to dig the trench to a deep of 20 cm and to shape it a bit like a quadrant of a circle. The berm had to be 10 cm high. 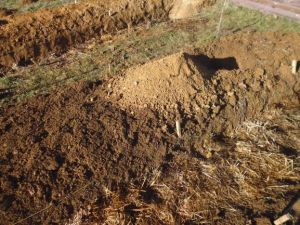 pickaxes, spades and shovels we started to dig out the ground and shape the berm. A method we used was to take off the layer of grass first and put it upside down at the place, where the berm should be. Like this, we ensured a stable base for the berm and avoided to have some grass growing, which would be in competition to our crop plants later.

At the left and right end of every swale we led the berm around the swale to close it and to prevent water from running out. While digging we noticed that the colour of the ground changed. This can be a sign for a higher quantity of clay at some spots and  can influence our decision later, which plants we want to grow where (see picture).

I mentioned, that it is very important that the bottom of the trench is always on the same level. So we had to use the A-Frame again and to dig at the places, where the bottom of the trench was too high. During this process we noticed two things: First we figured out, that the A-Frame had some limits, because it could only show us, if two points were at the same level. To bring the whole line on one height, we later used a level. Secondly we had to take care not to dig to much down at some spots, because this forced us to dig the whole bottom of the trench to this level. So we had to be careful and dig slowly. After this, the digging part was finished.

A thing we missed was to build a spillway, which could be useful when heavy rains appear. To prevent the water from over-floating, a so called sill can be dug into the berm to let the water out. This path can be blocked with a sand sack, leading parallel to the slope and which can be opened in case. This security can be imagined like a plug in a bath tub.

After finishing the swales it is important to observe them in a heavy rain to see how they work. In our case, we had some water gathering at several spots. This could mean that this spots were a bit lower or that the soil was more compressed or included more clay than on other spots. To solve this problem, the process of levelling can be repeated. Another observation we did was that the trenches are keeping snow longer then the flat ground around. This can be a sign, that the swales are stopping the airflow above the field and the cold air remains in the trenches.

The last step was to fill the trenches. This did not mean putting soil back from the berm into the trench, but there are several other possibilities. If you want a path following the trench, the trench´s bottom can be covered with fabric and filled up with gravel until the top. In our example, we wanted to use the trenches to put plants. For this, the trenches can be filled with woodchips or with straw and rotten branches. We put first one layer of straw, then one layer of branches and on the top again some straw. Like this, the material will decompose during the next year, providing a good soil for planting and in the same time absorbing water better than the pure ground.

Now the trenches are ready for planting or using them for another purpose.