Normally nobody of our group gets up at six o’clock on a Sunday. But today everybody did it – some of us with pleasure, some others needed a bit more effort – because all of us wanted to see actual bees after two days of just talking about them. At eight in the morning we had an appointment with a local bee keeper in Kamenica and we went there by foot which meant to get started at seven.

Bajram Bajrami welcomed us at his place and showed us his bees and his equipment. We saw the hives, the transport boxes and a lot of other stuff. In his place in Kamenica he doesn’t have actual hives, but he is breeding queens there. Since he has a quite big bee business in Kosovo with 800 hives, he needs a lot of them. So he could show us how he especially prepares combs for the breeding, with drones but still some worker bees. We were lucky that the bees were very young – like this they were not aggressive and did not sting a lot. It was very interesting!

Our bee teacher Yasemin from Turkey used the opportunity to explain us what she is doing differently than him since she does natural beekeeping and he doesn’t. For example, she doesn’t use any pesticides or other chemical treatments for her bees while Bajram is using some. He told us that he needs to exchange his pesticide every year because the vermins are developing an immunity against it. Besides that, he is also harvesting way more honey from the single hive than Yasemin. But all of that is your individual choice – every beekeeper has to find his or her way, what is best for him or her as a person and what is best for the bees.

When we came back, we had some time for reflection and further questions on bees. Yasemin was able to answer to most of them – thank you a lot for sharing your knowledge!

Bozevce team is ready to get started with bees. Next week we will receive three bee hives, let’s see if the future brings more! Because: The more bees we have around us, the more they can support the nature of our permaculture system and around it. Without bees, one third of the crops worldwide cannot be produced anymore. And the number of bees is decreasing in an alarming speed. 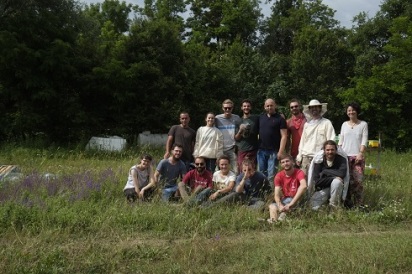 THE TIME TO DO SOMETHING IS NOW and the big question of our time is: TO BEE OR NOT TO BEE.